ACLPO Chair Don Kissick and Treasurer Paul D. Hinds teamed-up once again in handing-out the Declaration of Independence and other informational items in Faurot Park during the Star Spangled Spectacular.

Unlike last year, the effort was an uneventful one. The record heat on July 4 led to an unusually sparse crowd in the park. This meant a rather quick literature distribution effort for the two local Libertarian trailblazers.

ACLPO leaders received word that members of the Star Spangled Spectacular, Inc., planning committee had come to realize since last Independence Day that prohibiting such activity during their event, which is held on public property every year, was unconstitutional.

Additionally, in communication between Don and Lima City Attorney Tony Geiger, the city’s top legal counsel verified there also is no law in the city code granting officers of the Lima Police Department the authority to step-in on SSSI’s behalf and put a stop to any such activity by park patrons.

It was not longer after last year’s “Fiasco at Faurot” that all involved realized the incident was about far more than the outrageous and belligerent behavior of one individual associated with the Spectacular. When the police intervened it truly became a matter of defending an unalienable constitutional right.

Once the two were done handing out copies of the Declaration of Independence, they went from exercising their right to engaging in civic responsibility and spent an equal amount of time collecting refuse that others had left on the ground at Faurot Park. Since one of the concerns with literature distribution during the Spectacular is the possibility of extra litter, Don and Paul did their part to help keep Faurot beautiful. 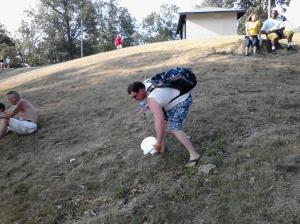